I wrote a feature article for MIT Entrepreneurship Review, entitled The Morphing Device.

The other day, it occurred to me that one of the oldest and simplest visualizations is the analog clock–it is a visualization of time using angles on a circular scale.

So, I decided to experiment with using color to visualize time and the result is Chromo Chrono:

It comes in two flavors. This is Pulse:

A series of concentric circles, going outwards from the centre, represent the hour, minute, second and millisecond. Each circle is colored on a scale that ranges from orange to black.

The Kinetic works on the same principle, except it has rings instead of circles and doesn’t show milliseconds: 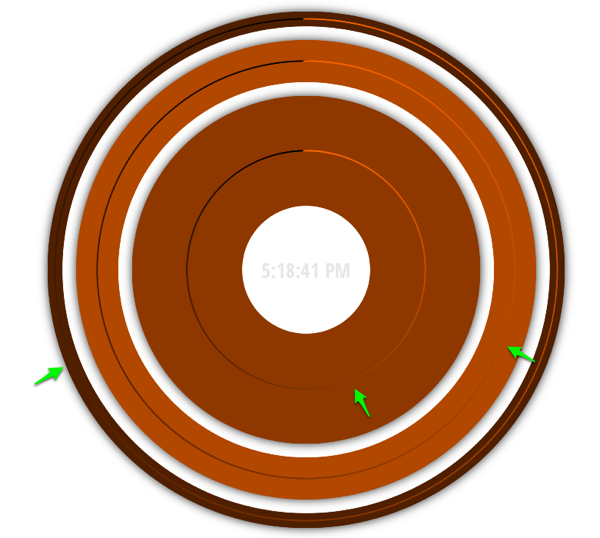 The main difference, however is a guide inside of each ring that makes it easier to tell the time. In each ring, the point where the color of the ring matches the color of the guide represents the time in exactly the same way as on a traditional analog clock. These points are highlighted using green arrows. If you look at the second ring closely, you will notice that it appears to be somehow moving. This an optical illusion caused by the fact that the point at which the ring and guides match is moving around the circumference of the clock.